When Tri-City ValleyCats’ Nathan Perry stepped to the plate to face State College Spikes lefty Hector Villalobos in the top of the sixth inning of the 2019 New-Penn League All-Star game, Blue Team manager Edgardo Alfonzo offered up some sage yet simple advice to him.

“I never faced that pitcher ever,” Perry recollected “Fonzie looked at me and said to me. ‘see the ball, hit the ball.'”

After taking the first pitch and falling behind 0-2, he jumped all over a fastball down the middle of the plate, depositing it over the wall for a 5-2 Blue Team advantage en route to a 7-4 victory and MVP honor for Perry Wednesday night at Richmond County Ballpark in St. George, the home of the Staten Island Yankees.

“It’s the first time I got to manage this guy and I liked what I saw from him,”  said Alfonzo, who’s also the Cyclones’ skipper. “We just faced [Tri-City] and we tried to pitch different to [Perry], so I just told him, ‘If you see it, you hit it.’ And that was a great swing.”

The Blue Team drew first blood when J.D. Orr (Batavia Muckdogs) singled to lead off the game. Joe Davis (Lowell Spinners), who also singed but was cut down trying to stretch it into a double, drove Orr in from second for a 1-0 Blue Team lead. 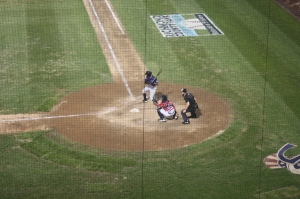 Wimer Reyes (Brooklyn Cyclones) led off the frame with a walk. Davis’ single moved Reyes to third, and Bryan Lavastida’s (Scrappers) sac fly scored the Cyclone to swell the Blue Team’s lead to 4-0 in the top of the third.

But the Red Team would get one back. Martin Figueroa (State College Spikes, Cardinals) reached base on a fielding error by Simmions. Andrew Warner (Spikes) singled to left to put runners at the corners. Eliezer Alfonso’s (Connecticut Tigers) base hit scored the runner from third, cutting the lead to 4-1 in the bottom of the third.

With runners on first and second, Greg Jones (Hudson Valley Renegades, Tampa) singled home David Vinsky (Spikes), closing the gap to 4-2, as runners move up to second and third on the throw home.

Caldioli Sanfler’s (Auburn Doubledays, Washington Nationals) infield hit plated a run to cut the lead to 4-3 in the bottom of the fourth, making it a game.

But the Blue Team would respond.

With runners on first and third, Blake Sabol (West Virginia Bears, Pittsburg) took off and stole second. Seeing a scoring opportunity, Brayan Rocchio (Scrappers)  darted home. sliding in safely for a 6-3 advantage in the seventh..

Then, Sabol raced home on a wild pitch to increase the lead to 7-3 in top of the seventh, capping the scoring for the visiting squad.

For good measure, Red Team’s Kyle Stowers (Aberdeen IronBirds) launched the ball over the centerfield wall to slice the deficit to 7-4 in the bottom of the eight.

But closer Cameron Junker (West Virginia Bears) retired the side in order in the bottom of the ninth to seal the win for the Blue Team.

For the Blue Team, Cleveland’s 10th-ranked prospect, Rocchio, stole three bases in the game, including second, third and home. Valera, Rocchio’s Scrapper teammate, had a double and scored a run.

Jones went 2-3 with an RBI for the Red Team