Janssen, who also played for the St. Louis Blues for four campaigns, was known for his toughness and propensity for fighting.

Autographs are $20 per item. 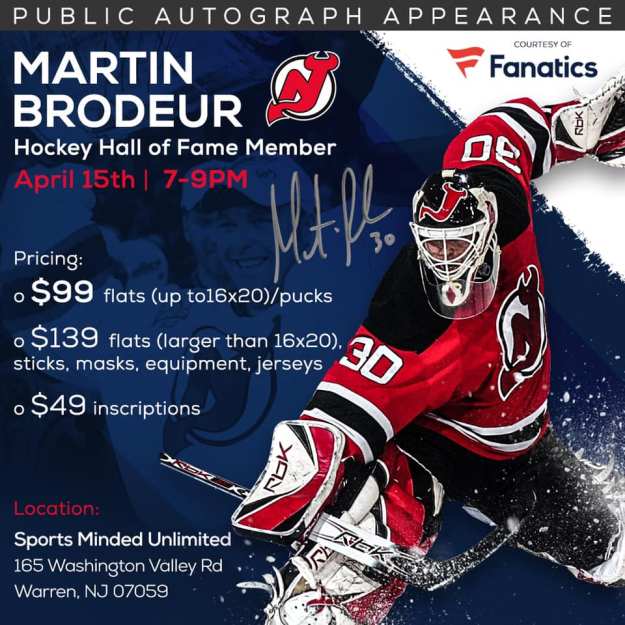 Martin Brodeur, a Hall of Famer and current executive vice president of business development for New Jersey, will be at Sport Minded Unlimited on Monday, April 15 from 7:00 p.m. — 9:00 p.m.
Brodeur won three Stanley Cups with the Devils and five Eastern Conference titles in 17 postseason campaigns. He also won two Olympic gold medals with Team Canada in the 2002 and 2010 Winter Olympic Games, as well as several other medals in other international competitions.
Brodeur is arguably the best NHL goalie ever, well worth the money spent to meet him and obtain his signature.
Tickets go on sale starting Saturday, April 6th, over the phone and in-person. 350 tickets will be available to the public. There are no ticket limit per person. Sports Minded Unlimited will also accept limited send-ins.
Autograph pucks and photos are $99 each, and $139 apiece for photos greater than 16×10, jerseys, sticks and equipment. Plus, $49 per item for an inscription, with a three-word maximum.
Please call 732-469-3556, e mail: sportsminded@prodigy.net, or log onto http://www.sportsmindedunlimited.com/ for further information.