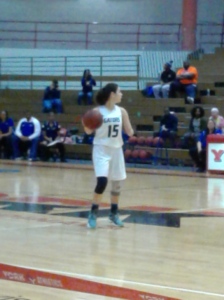 The top-seeded Lab Museum United girls’ varsity basketball team didn’t reach its destination at York College for its PSAL Class ‘A” semifinal matchup against No. 12 Summit Academy Sunday on time due to its driver showing up late.

Head coach Michael Lloyd said the Lady Gators arrived approximately 30 minutes before game time, impacting their performance in the first quarter, which resulted in a 9-6 hole. But Lab Museum gradually chipped away at the lead, and came from behind to convincingly beat the Lady Eagles, 56-44, Sunday to advance to the finals.

The Lady Gators were able to exact revenge on Summit Academy for a 54-46 non-league loss in December, as they made key adjustments to their postseason game, which led to their impressive victory.

“I told them we did a good job against them the first time, in certain areas,” Lloyd explained to BrooklynSportsWorld.com after the contest. “But to lose the game by eight, and we went 15 for 33 from the line. So, I said if we can take care of that, and shoot the ball a little bit better and get a few more (defensive) stops, I think we’ll should be fine.”

Lloyd’s game strategy paid dividends, as it contained the Lady Eagles’ two best players–Charity Barnes and Daysiah Smith–to 11 points each. Though Lab Museum sputtered out of the gate, the second period told a bit of a different story, as it posted a 16-12 advantage, helping them take a 22-21 lead at the half.

The Lady Gators created distance from Summit Academy with a dominant 17-6 third quarter and subsequent 39-27 lead.

Much to Lab Museum’s dismay, the Lady Eagles started to climb the peak, and cut to deficit to 43-39 with 3:16 remaining in the tilt.

But sophomore guard Dasha Goodman, just like she has done so many times during the season, came through in the clutch, draining a three-pointer with 2:45 left on the clock. It was the proverbial dagger in the collective heart of Summit Academy.

“It was a big moment, and they were kind of getting their momentum back,” Goodman said. “So, I felt that we just needed that moment and just kind of that spark to get back into the game. And I just let it go.”

The Lady Gators face the third-seeded Madison Lady Golden Knights for the ‘A’ Championship Saturday at 3:00 p.m. at Baruch College in Manhattan.