Last Saturday, at Marine Park, over 200 people walked in remembrance of Daris Bagarozza— who died of a ruptured brain aneurysm, a weak bulging spot on the wall of a brain artery that burst, at the age of 30, 13 years ago—and others who lost their lives to the condition.

“I think it was a great turn out,” said Julie Bagarozza, Daris’ sister in-law and one of the organizers of the event along with her husband, Patrick. “I think we did better than last year. I would love to have 500 to 1000 people (in the future). I would love to see it as big as other walks. But my mother-law was happy with the turn out.”

The walk serves as a fundraiser for the Brain Aneurysm Foundation (BAF), as well as spreads brain aneurysm awareness and provides emotional support for people who have been affected by the disease.

Several medical experts, such as Dr. Michael Ayad, Director of Cerebrovascular and Endovascular Neurosurgery at New York Methodist Hospital, who was on hand at the walk to educate attendees, believe many people don’t even know they have it because unruptured brain aneurysms are typically and completely asymptomatic.

In fact, an estimated six million people in the United States have an unruptured brain aneurysm, or 1 in 50 people, according to BAF.

However, BAF’s website reports that the annual rate of rupture is approximately eight – 10 per 100,000 people, or approximately 30,000 people in the United States suffer a brain aneurysm rupture. Ruptured brain aneurysms are fatal in about 40 percent of cases. Of those who survive, about 66 percent suffer some permanent neurological deficit. 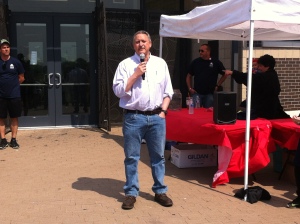 But it’s not all bad news for brain aneurysm patients. Ayad (pictured left) said If somebody is transported to a suitable facility that is able to deal with aneurysms, it can treat the source of the bleeding. Many patients can make fantastic recoveries, such as the survivors who attended the event.

One such fortunate person is Jennette Kruszka, who, after experiencing an excruciating, debilitating headache while vacationing in Madrid, Spain, in February 2015, took a nine and half hour flight home, and headed straight for the hospital upon landing.

Much to Kruszka’s dismay, after several tests came up negative for meningitis, the hospital sent her home when she refused the painful spinal tap test. But after enduring more agonizing headaches at home a day later, she decided to return to the hospital, and demanded a cat scan and MRI of her head, which quickly revealed the source of her agonizing distress.

“After waiting for about an hour, they finally did it,” Kruszka said, “and within five minutes there were five doctors in my room telling me I had two brain aneurisms and an AVM,” which stands for Arterial Ventricle Malformation–a congenital tangling of abnormal blood vessels connecting arteries and veins in the brain, which, she said, were feeding her aneurysms.

“After two scary weeks in the hospital and three embolizations to stop the bleeding of the aneurysms so it would be safer for me, I was sent home to explore my options,” the Bay Ridge native continued. “I had two decisions to make about the AVM: I could either have brain surgery to remove the AVM or have Gamma Knife Radiosurgery.”

She learned the Gamma Knife Radiosurgery would be less invasive but would take two to four years to work, with a measure of uncertainty, Kruszka noted. The brain surgery, although riskier, had a higher success rate.

Kruszka, 34, opted for the latter, with the help of Dr. Robert A. Solomon, a highly regarded neurosurgeon at New York-Columbia Presbyterian Hospital in Manhattan.

“I found Dr. Solomon at Columbia Presbyterian, and we discussed the two options, and I had a better chance of getting rid of the AVM with the brain surgery,” explained Kruszka, who is the Director of Marketing and PR at Kleinfeld—a longtime, upscale bridal boutique and star of its own TV show, Say Yes To The Dress, on The Learning Chanel.

Warning signs and symptoms of a brain aneurysm include: a localized headache; dilated pupils; blurred or double vision; pain above and behind an eye; weakness and numbness; and difficulty speaking.

BAF’s websites strongly urges that any individual experiencing some or all of the aforementioned symptoms, regardless of age, should undergo immediate and careful evaluation by a physician.

For more information on brain aneurysm, and to make a donation, visit Bafound.orgBafound.org and http://give.bafound.org/goto/netty.